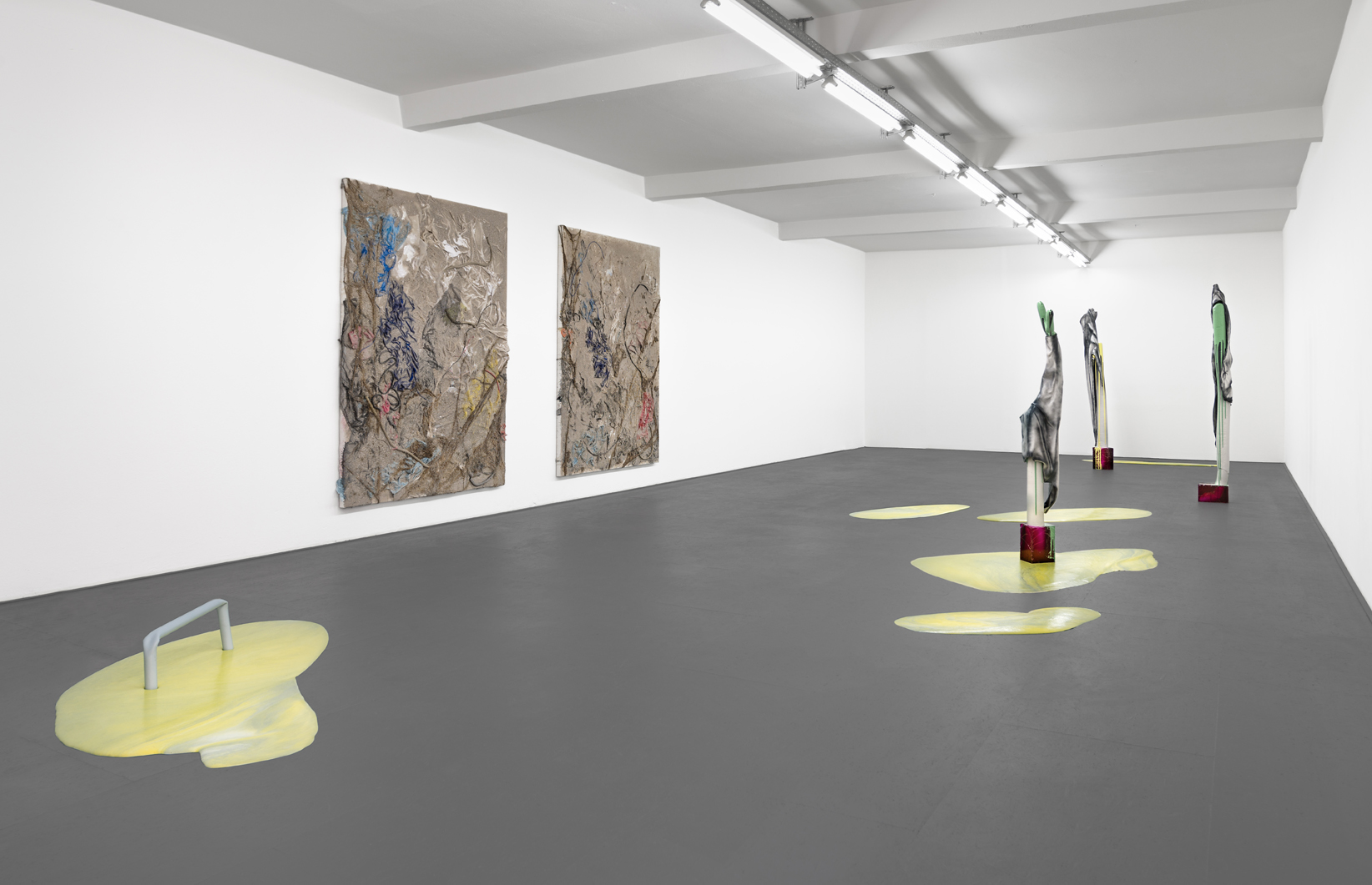 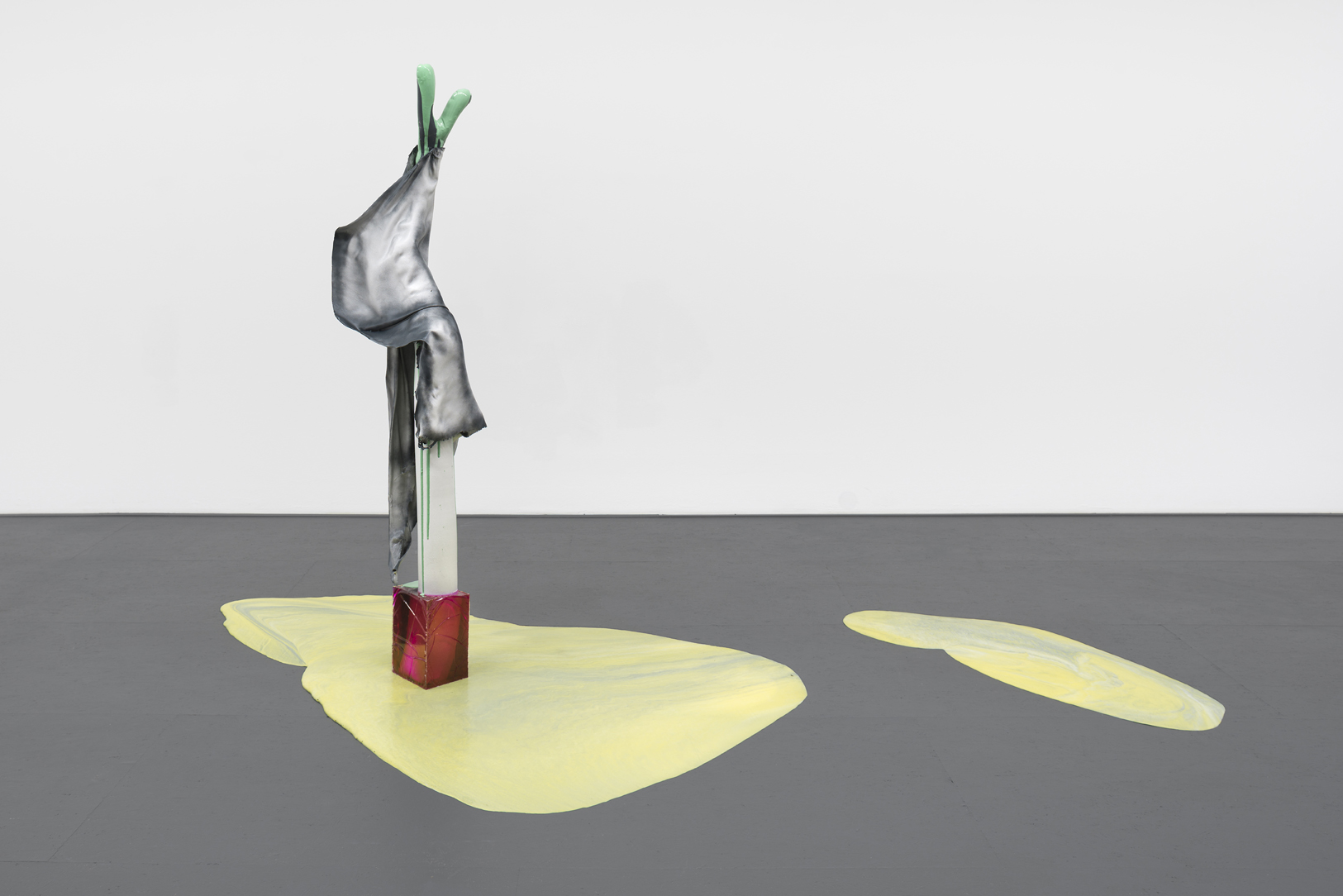 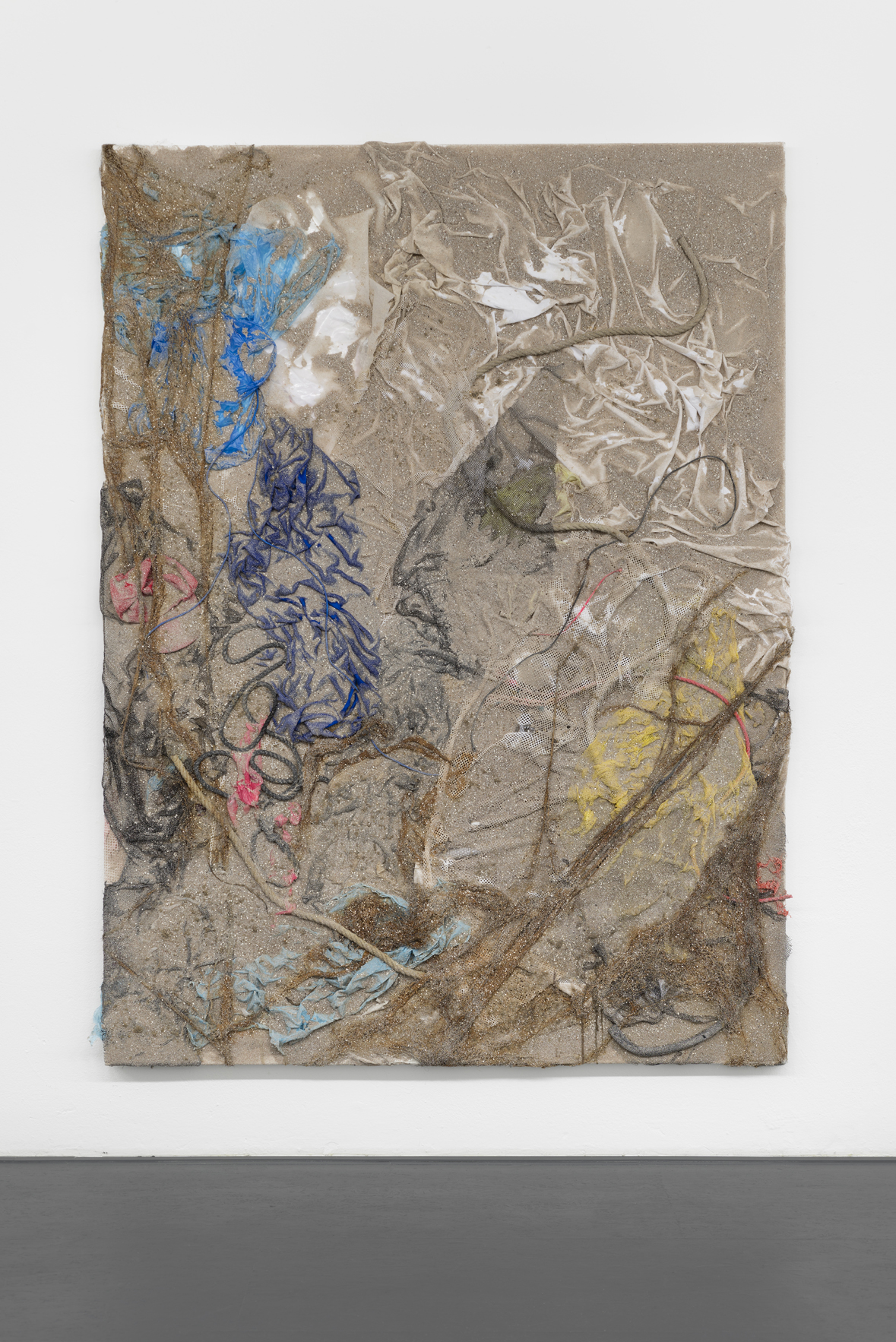 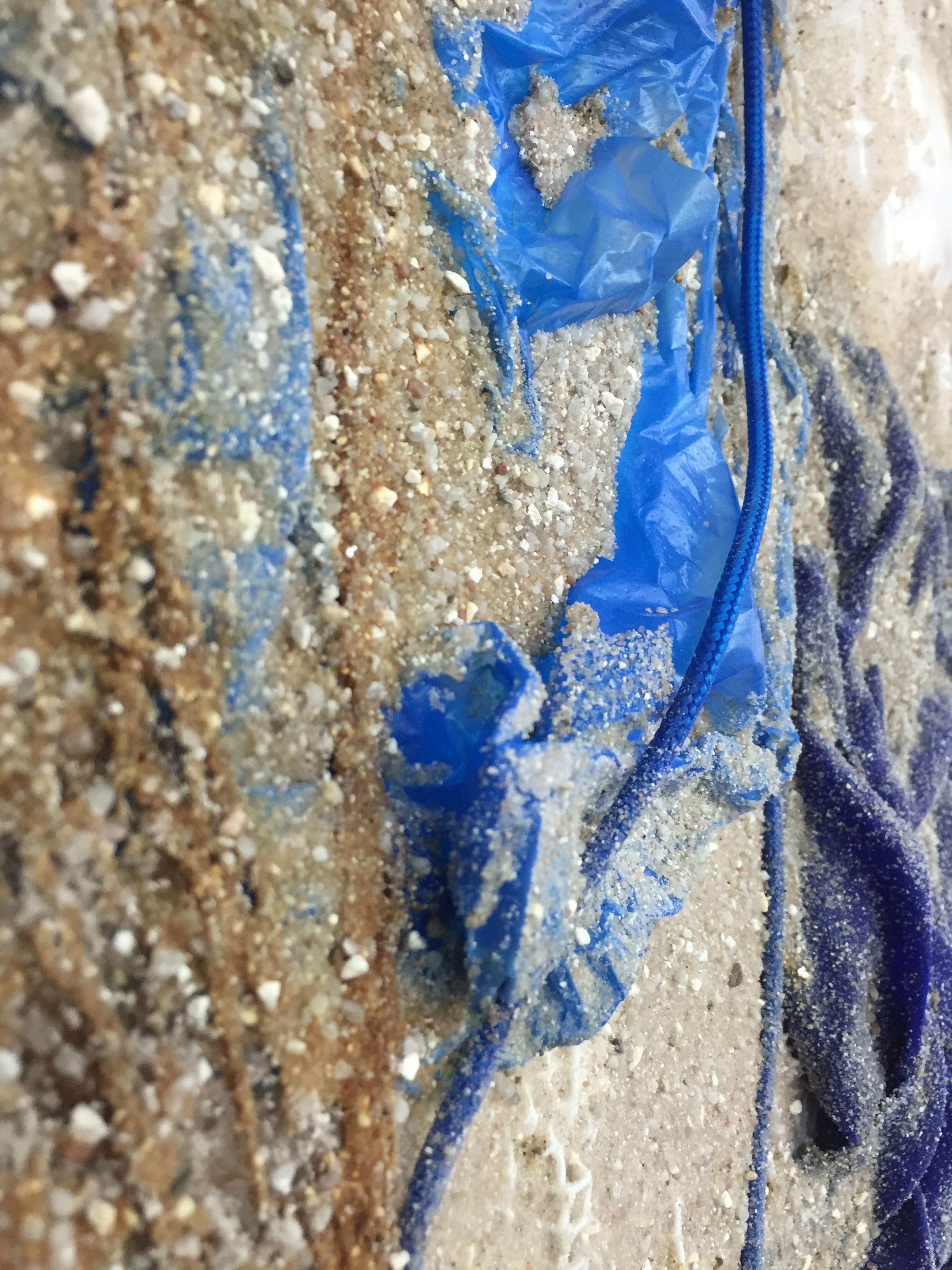 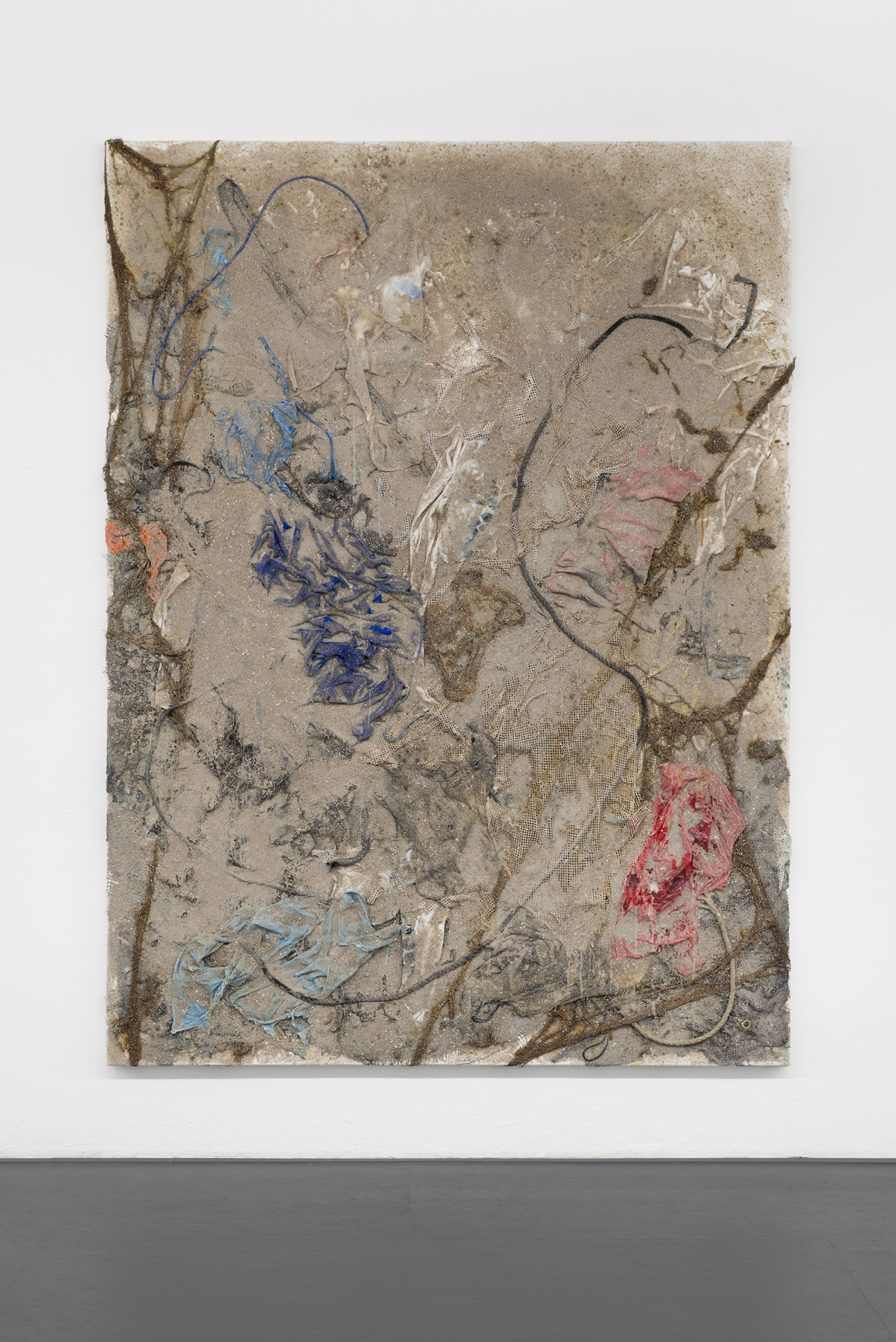 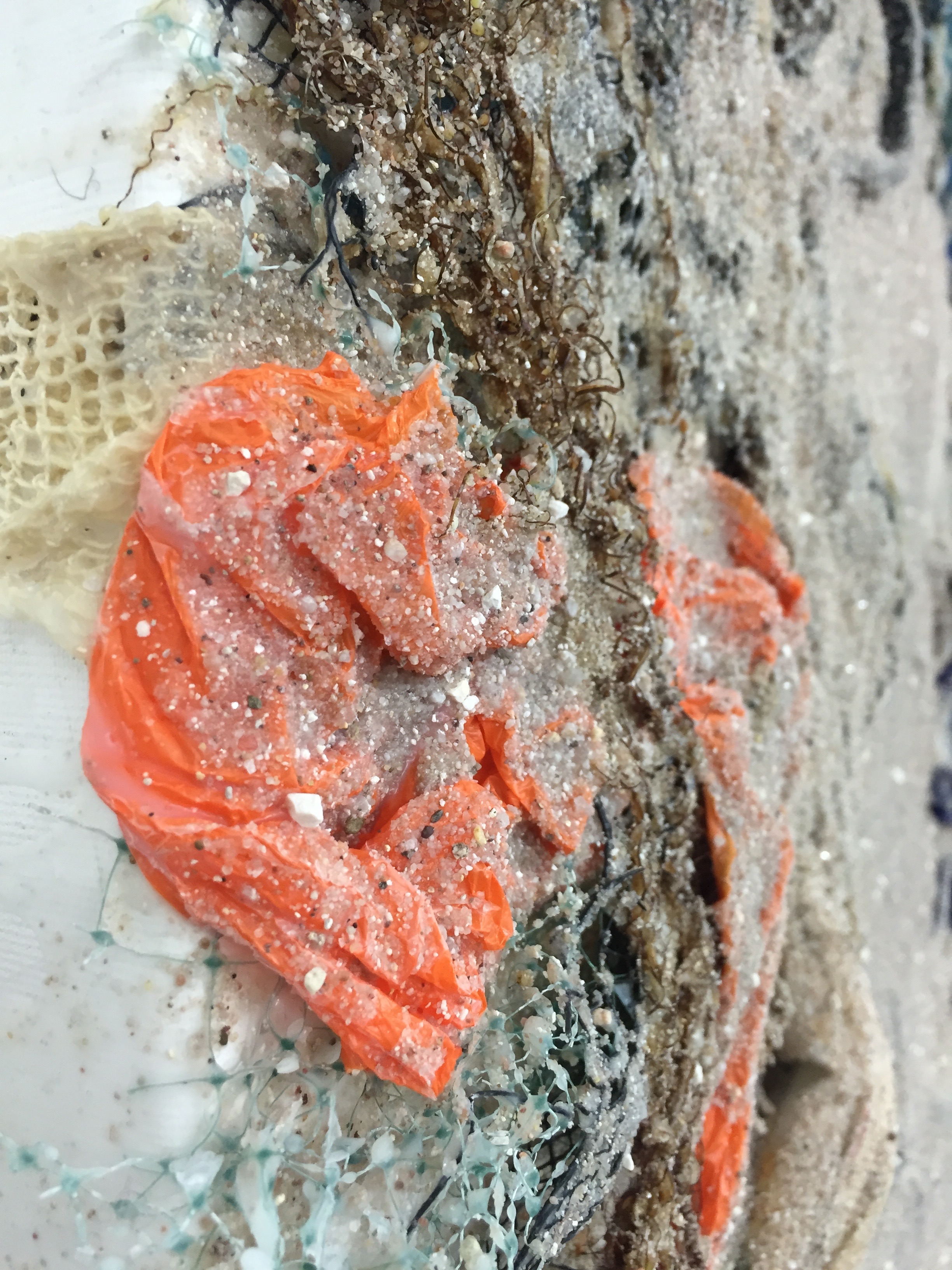 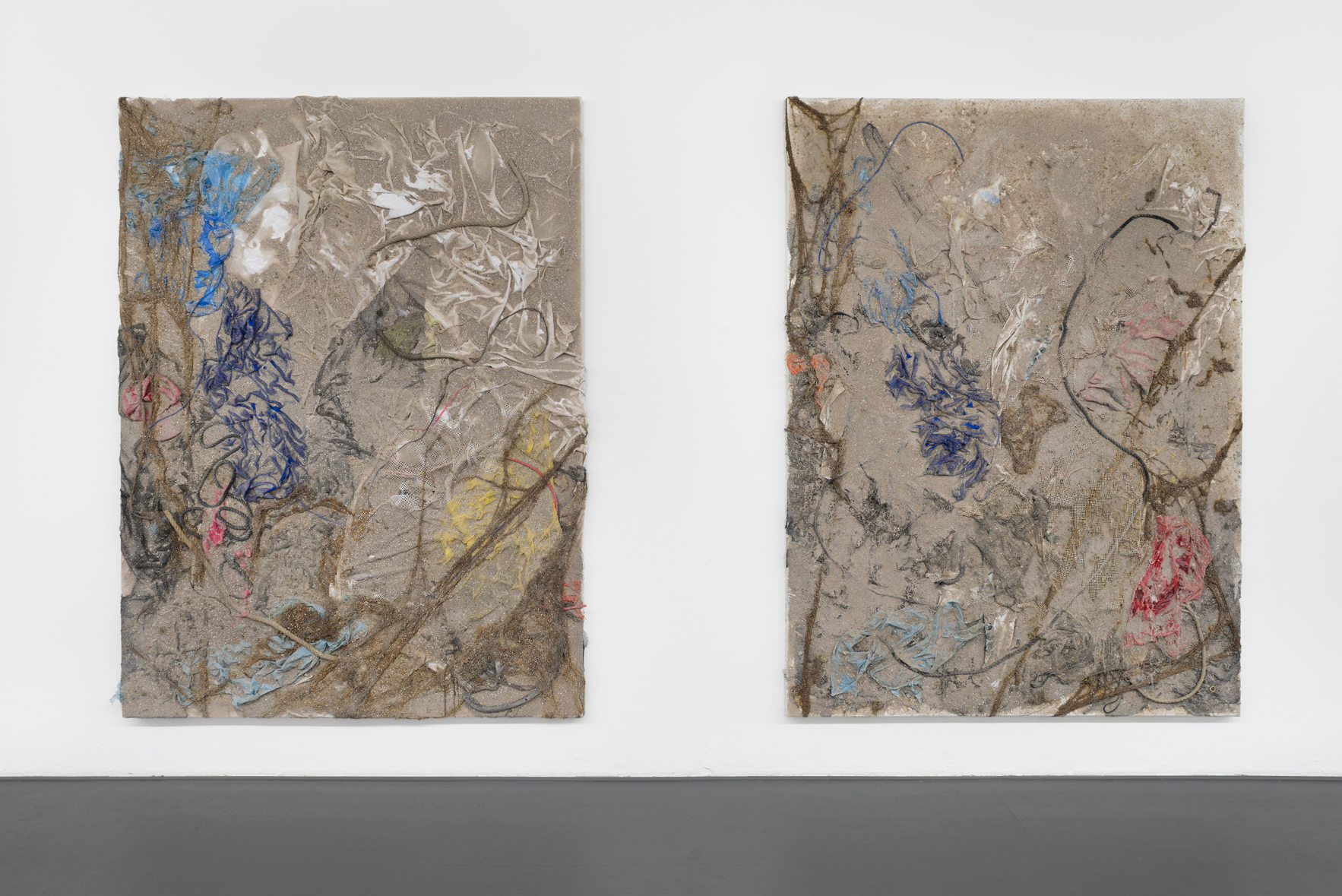 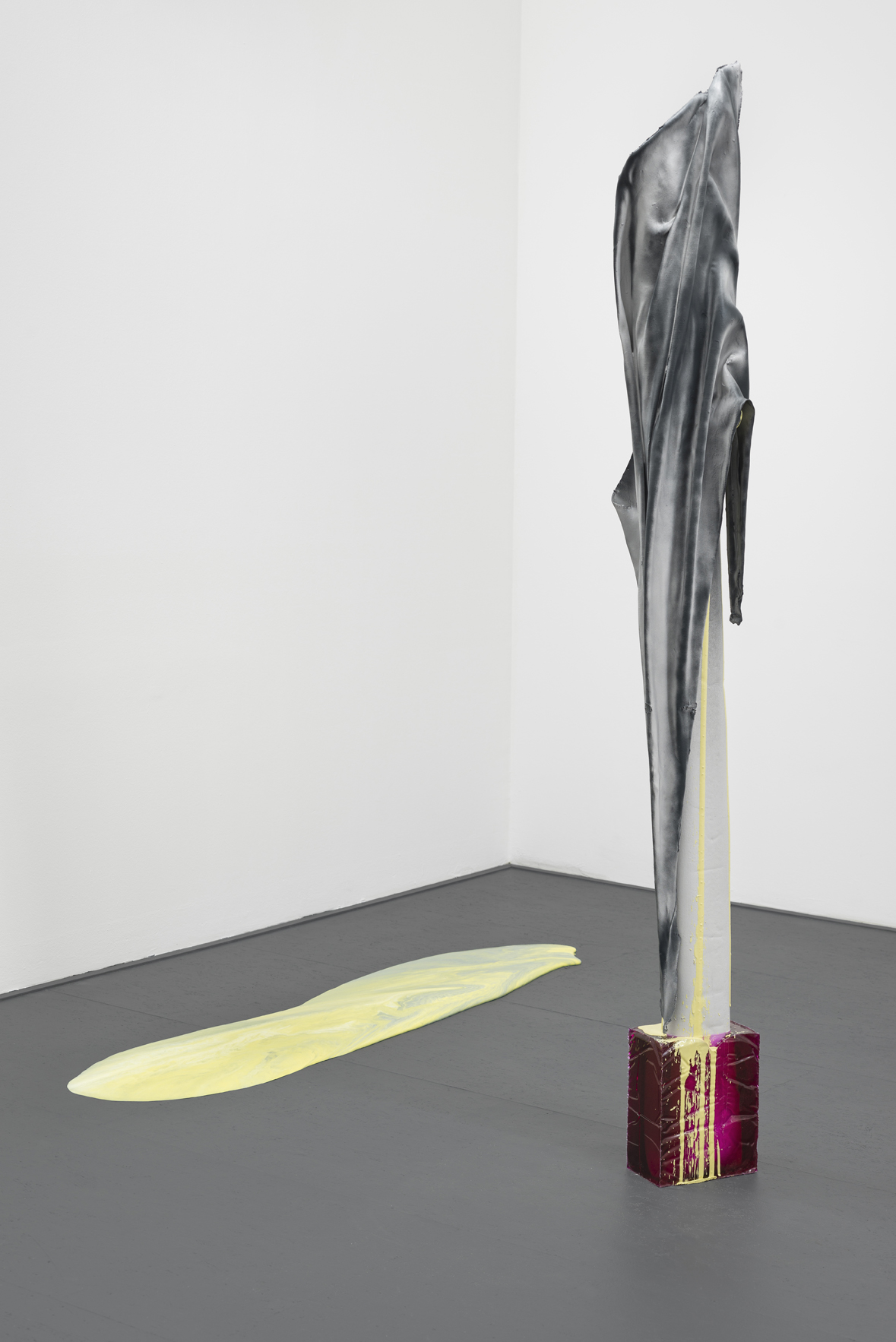 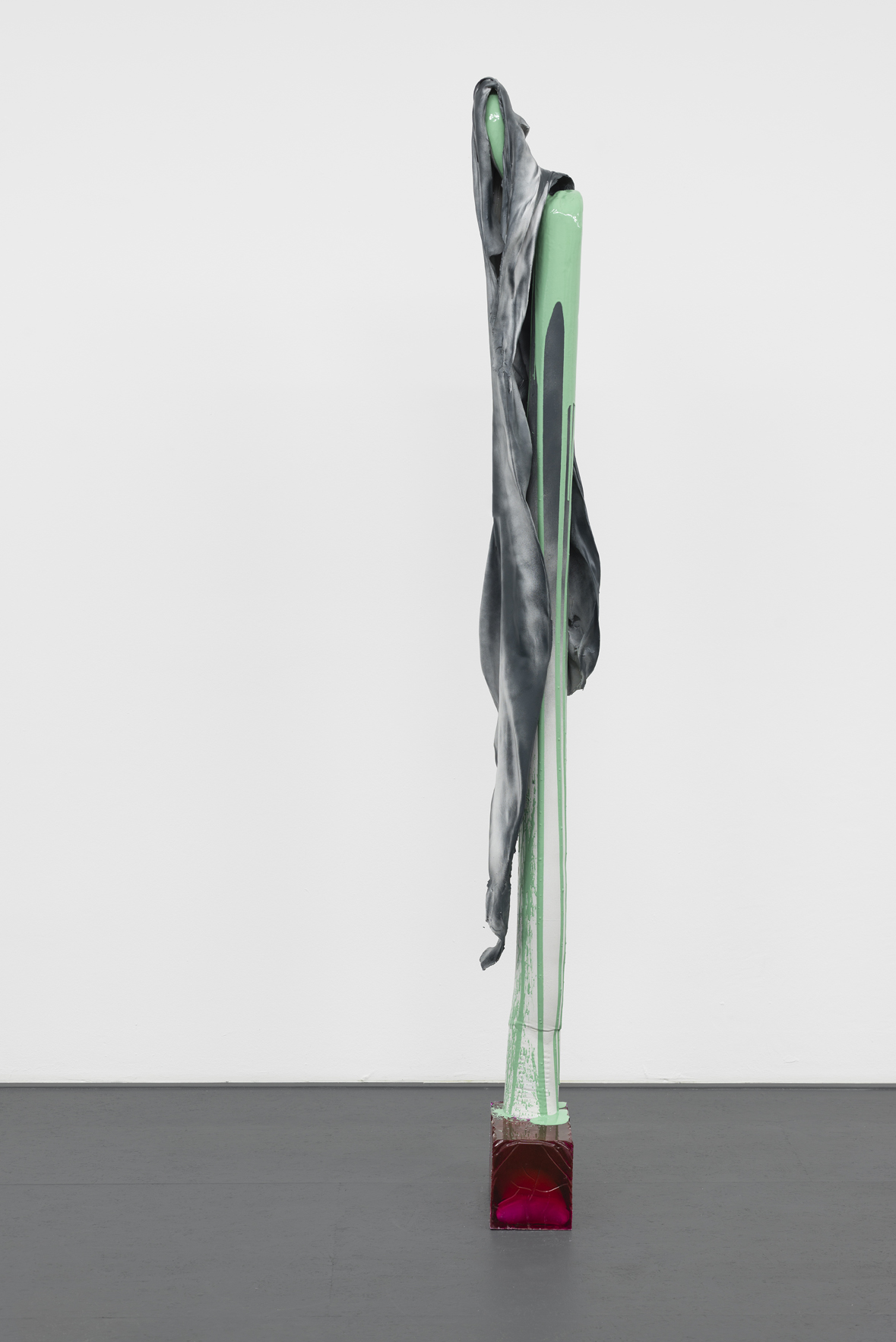 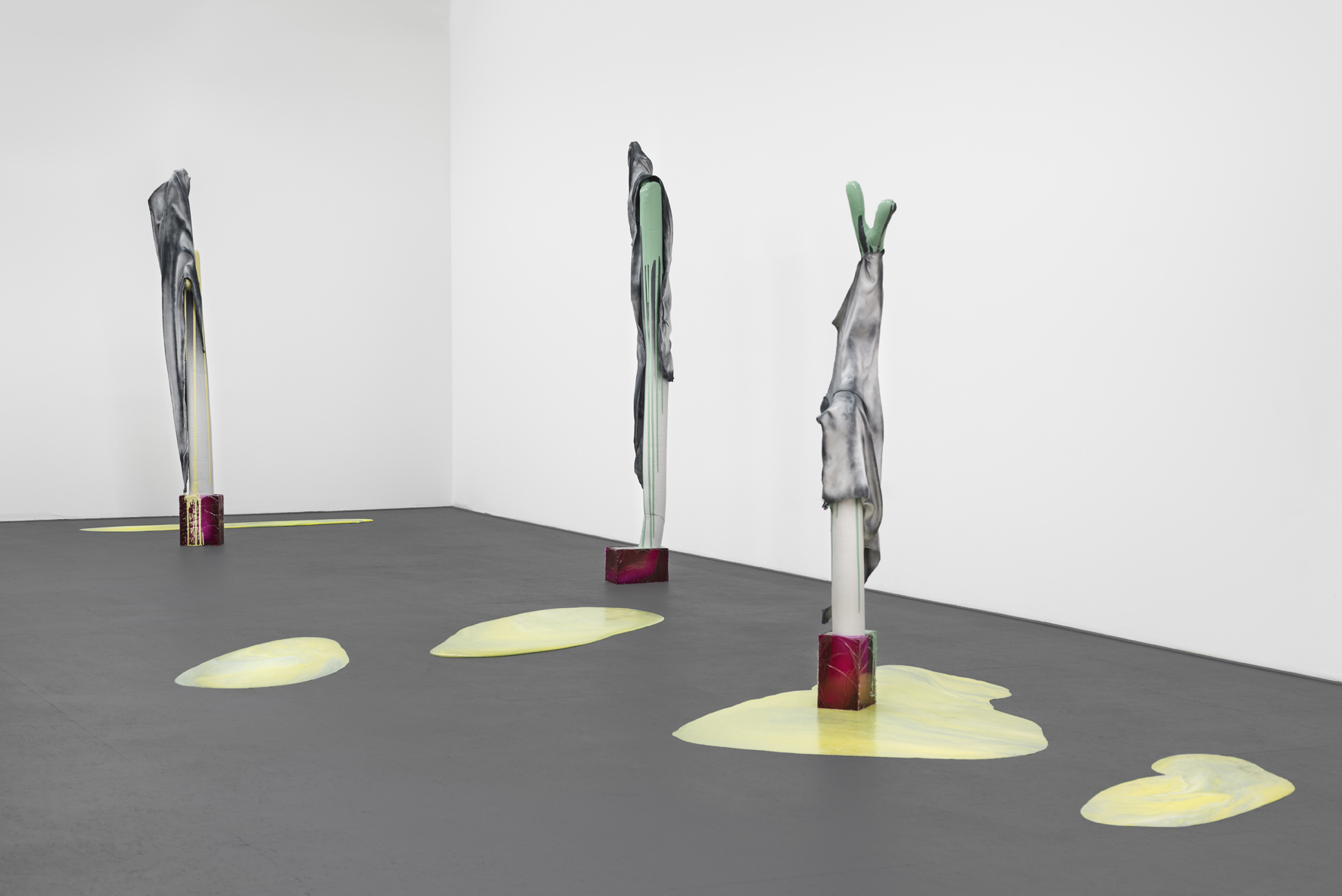 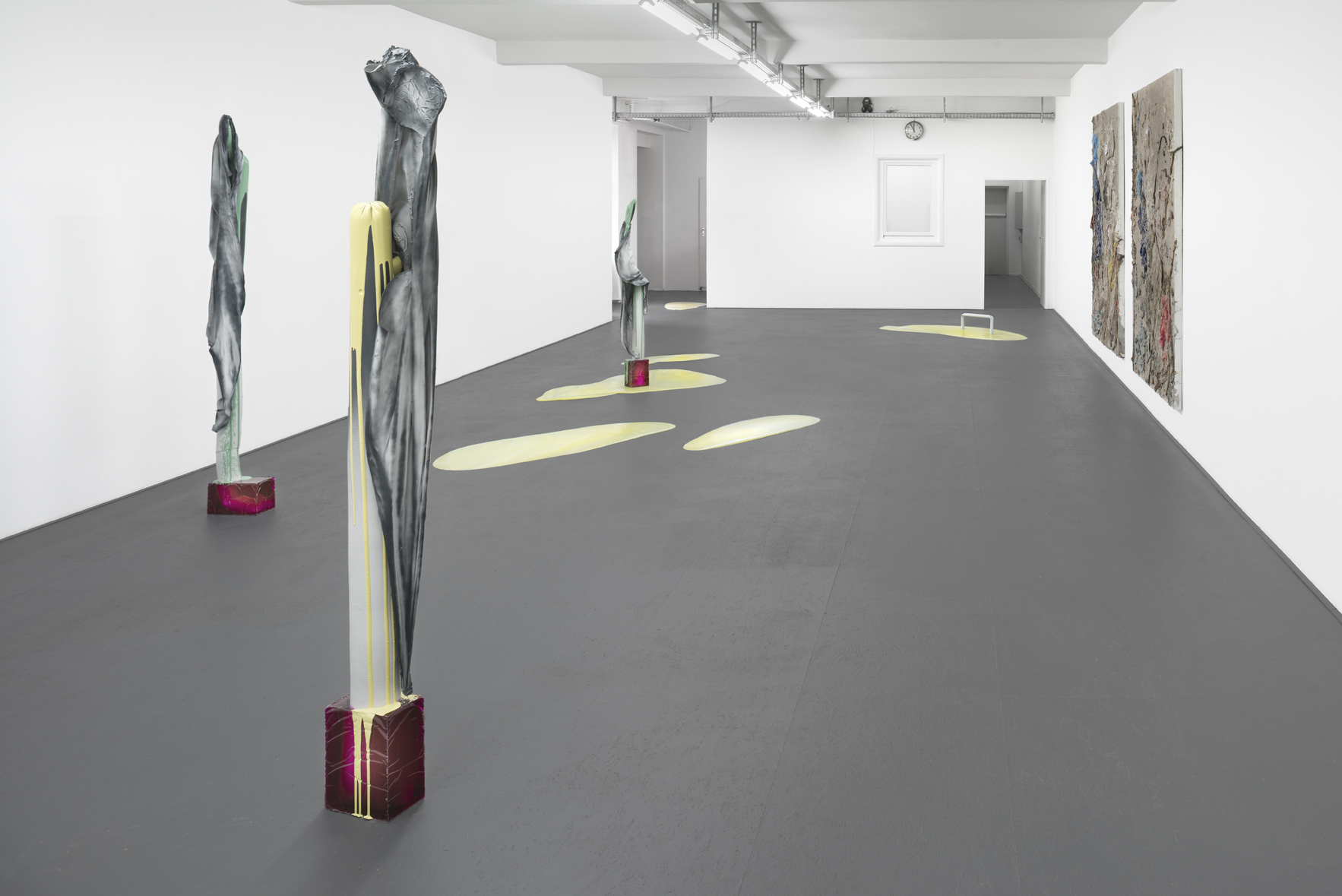 INFO
On the occasion of Berlin Gallery Weekend 2016, DUVE Berlin is delighted to present *VITA PARCOURS*, a two-person exhibition by Jens Einhorn and Christopher Füllemann. This is Einhorn’s second and Füllemann’s first exhibition at the gallery in Berlin.

*VITA PARCOURS* encourages the viewer to navigate a display of almost athletic artworks. Freezing movements of materials is an essential part of Christopher Füllemann’s practice. The pieces on view at DUVE Berlin extend their visual purpose towards the power of inertia - however, they still flicker with the volatility of their original, moving nature.  Jens Einhorn has been using a maelstrom of fabrics, chains, strings, plastic bags, sand, and other unconventional materials to evoke a chaotic dynamic of things. Einhorn’s paintings function as hardly readable maps, but maps nonetheless: their composition can be read, trajectories can be followed: yet, it is unclear where they lead.

In *VITA PARCOURS*, sculptures, paintings, puddles and wall reliefs interact as consequential gestures building up towards an immersive choreography. Each work encapsulates its predecessor and successor in (the) space; their vigorous, yet static character reveals the fragility of force and a sensual vulnerability within their nature. The works displayed in the show also ooze a warm feeling of fatigue and finitude. They are the end product of demanding processes and their physicality is directly linked to their creator’s efforts. Instead of hiding this, *VITA PARCOURS* partially aims to accentuate the bodily aspect of the presented pieces and art production itself. Luster, graininess, irregularities, perforations: such elements refer directly to the presence of an acting and active body - human or synthetic - in their making.

Nevertheless, as much as it is suggested, the flesh is also absent; this is particularly visible in Einhorn’s work, in which one would almost expect a human figure to pop up; its visual nonappearance may therefore point towards disappearing bodies and more pressing issues. Even Füllemann’s sculptures, while referencing organic shapes, refuse to be associated with visual codes too familiar to be associated with recognizable elements. Hence, the artists tease us, triggering an almost tactile game of hide and seek and pushing us towards a – perhaps? – somewhat wicked interpretation.

*VITA PARCOURS* aspires to plunge the viewer into a brawny and sharp environment. It is an exhibition where one should be allowed to feel the nature of the works within himself: languorous yet pulsating, sober yet whimsical, tense yet nonchalant, motionless yet evasive.
Jens Einhorn was born in 1980 in Leisnig, DE. After studying at the Leipzig Art Academy with Astrid Klein, Einhorn enrolled at the Düsseldorf Art Academy, where he obtained his Meisterschuler with Tal R. Recent solo exhibitions include *We Are All We Have*, DUVE BERLIN, Berlin, DE, 2015; Electric Eyes, Luce Gallery, Turin, IT, 2015; Too Much Future, Bruch&Dallas, Cologne, DE, 2015. Einhorn has taken part in group exhibitions at Annarumma Gallery, Naples, IT; COSAR HMT, Düsseldorf, DE; Contemporary Fine Arts Berlin, DE;  Museo Nazionale di Capodimonte, Naples, IT; Potemka Contemporary Art, Leipzig DE; C. Rockefeller Center for the Contemporary Arts, Dresden, DE; and Galerie Kleindienst, Leipzig, DE, amongst others. He lives and works in Berlin, DE.